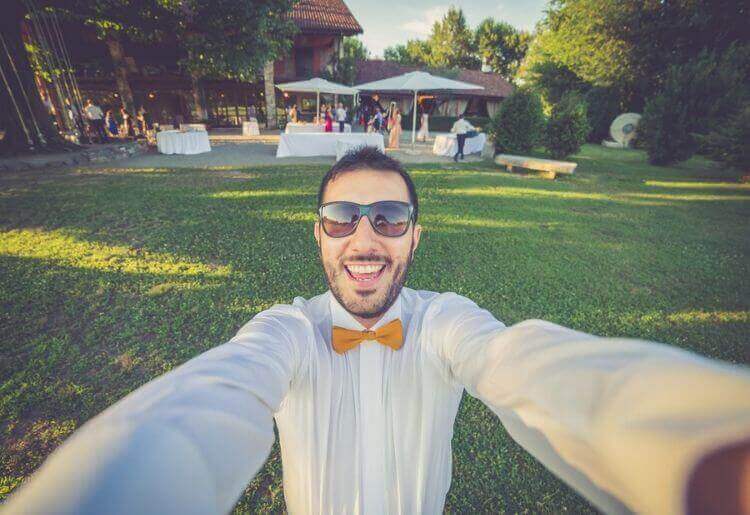 In a recent survey, DatingScout analyzed more than 22 million online dating profile photos in order to reveal how singles from across the world present themselves on their favorite dating sites.

The results of the survey, which are sometimes surprising, sometimes quirky, but always fascinating, give us a glimpse into the online dating habits of singles of different ages, genders, countries, and lifestyles. Here’s a look at 5 of the more surprising findings.

1. Men use more photos of themselves attending weddings than women

If you’re combing through online dating photos, you’re more likely to meet a groomsman than a bridesmaid. Of all photos that take place at weddings, more than half of them, 56.65% to be exact, were posted by men. Maybe this reveals a thread of subconscious romantic intent lurking beneath mens’ otherwise tough exteriors (men are also photographed holding weapons and wild animals at a much greater ratio than women). Or maybe men are just more inclined to get as many uses as they can out of a tux rental.

American singles love drinking and they’re not shy about advertising it. Beer can almost be considered a part of the family for how often it shows up in our online dating photos (48% of drinking photos feature beer). Wine and liquor are predictably up there (33% and 9%, respectively), while champagne is featured less than coffee (.68% and 1.7%) and just slightly higher than a glass of water (.3%). Of all the countries surveyed, America falls last in singles photographed drinking champagne.

You wouldn’t expect more singles to gravitate to Disney World, the ultimate family destination, than to the mecca of hedonism and irresponsibility itself, Las Vegas. But the DatingScout survey shows that while both destinations made it into the top 10 most photographed locations in American dating-profile photos, Disney World landed higher up (number 8), while Vegas barely made the cut, falling last at number 10.

American singles come off as relatively humble when it comes to flaunting their wealth in dating pics. Photos of daters posing beside luxury cars, onboard fancy yachts, or in the backseats of limos are prevalent across all nations, but the French took the top spot. Australia landed in second place, followed by Germany and finally America, which at number 4 falls right in the center of the countries surveyed. Lest Americans get too boastful about their lack of boasting, they still showed more bravado than Italy, Spain, the UK, and Ireland, whose singles were found least likely to flaunt their riches in order to land a date.

5. Young singles are most likely to use photos with kids

It would seem that childless 20-somethings would be the least likely group of singles to use photos with children sitting on their laps. But the survey found the opposite to be true: the 18-24 year-old age bracket is the group with the highest amount of singles posing with children (and furthermore, it was an almost perfect tie between men and women using photos with kids). From there, the numbers go on a steady decrease, with daters over the age of 55 being the least likely to have children in their photos.

ByScott HirschJan. 23, 2020
Scott is a content writer who has worked as a special education teacher, lifestyle writer, and researcher. He enjoys literature and travel and believes that a sense of wonder and curiosity is the key to living a fulfilled life.
Best Dating SitesCompare All
Zoosk
EliteSingles
Match
SilverSingles
OurTime
Compare All