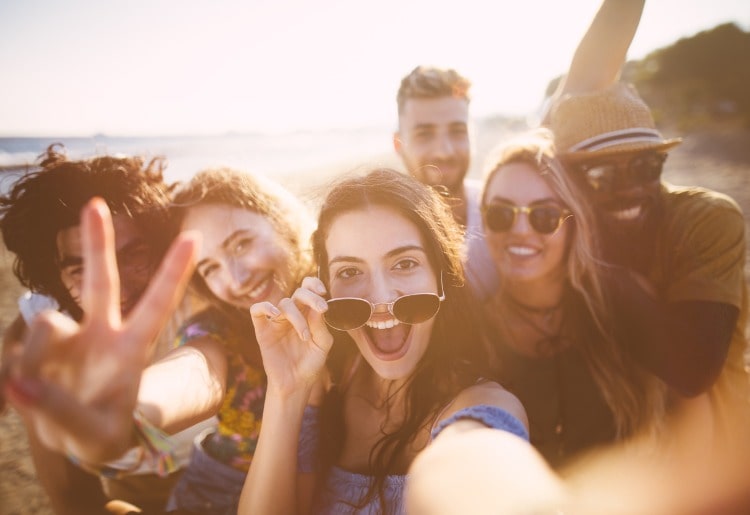 News flash! If you just moved to a different state, live in a big city, or generally experience feelings of loneliness and crave the urge to make new connections, all you have to do is use the apps that are probably already downloaded onto your phone.

No, I’m not talking about Facebook or Twitter (although those can work, too). Believe it or not, dating apps aren’t just for finding a hookup or the love of your life. Nope, they’re actually an incredible way to make friends, too. How do I know? I’ve been there and done that SEVERAL times. Although I’ve never locked in a serious partner from using the apps (I’m still very single), I’ve definitely met and kept more friends than I can count on 2 hands over the last few years. Hear me out.

I met one of my best friends, Jackie, on Bumble back in 2015. After only knowing each other for a month, she was one of the first people on my front doorstep as soon as she heard the news that my ex-boyfriend passed away. Needless to say, we’ve been close ever since she delivered that beautiful aloe plant that day, and we’ve been there for each other as we panicked on flights, moved into new apartments, and started new jobs. I’m beyond grateful to have met her, and I’m even more grateful to Bumble for enabling me to connect with her in the first place.

After Kevin and I matched 3 years ago, we’ve continued to keep in touch, despite the fact that we’ve never even met in person. We almost met once when I visited his area, but I was too drunk and missed his texts. Oops. That’s beside the point, though. He lives in New Jersey, and I live in New York, but we’ve supported each other from afar ever since we connected in 2016. I’ve been his cheerleader throughout his journey from being a college student to becoming an accounting manager at one of the most popular casinos where I happen to love playing penny slots. He’s been a core part of my support system as I’ve survived terrible full-time jobs and scored new freelance writing gigs.

Mike and I went on a date after matching on Tinder, and we hooked up a few times after that, but we just weren’t compatible for the long-term. However, we stayed friends, occasionally hang out at coffee shops, and continue to hype each other up on Instagram whenever we announce big life changes.

On work trips where I travel out of state, I’ve used dating apps to find locals (or “tour guides” as I’ve oh-so-kindly called them) to grab food and drinks with on my downtime. Nick showed me around Toronto and Jenna brought me to an incredible vegan restaurant in Los Angeles. If we didn’t match, I wouldn’t have been able to enjoy these new locations like a resident.

Sure, meeting strangers in new locations was a huge risk as a solo female traveler, and it took a lot of trust that they wouldn’t catfish me and lure me into dangerous territory, but that’s why you need to vet your matches seriously and carefully. Thankfully, I’m alive to tell the story today, and I have some cool new memories to share as well.

Dating Apps as the Antidote for Modern-Day Isolation

The list goes on, but you get the point. I’ve connected with countless other folks who I continue to text, follow on social media, and hang out with over the years—all because we happened to stumble upon each other on the apps. We may not have hit things off romantically or sexually, or even gone into the situation with that intention, but we still managed to establish strong platonic relationships nonetheless.

It’s difficult to meet new people nowadays, especially if you skip happy hours after work or don’t like to party and go out to bars on the weekends. Joining clubs, gyms, and taking up group-oriented hobbies are effective ways to find like-minded people, but if you’re shy or don’t have the money to throw toward classes or memberships, then what are you supposed to do? Use dating apps.

No matter what you use them for, matching with strangers online is an opportunity to get to know new people on a personal level. That’s kinda what happens when you change your goal, open your mind, expand your expectations, and share information about yourself with people who you don’t care if they take it or leave it. You develop feelings for each other and begin to care for one another. You make friends.

Generally speaking, dating apps are the modern-day way to connect with new people near or far, right? Whether your plan is to grab coffee with someone your age, find a partner to marry within the next few years, score a sugar daddy or mommy, or just casually message friendly faces to see where things go, using platforms like Tinder, Zoosk, or even Match will introduce you to people of all ages, interests, and lifestyles. Why do you think these mega-brands have added sub-platforms for non-romantic relationships over the years? We’ve seen the launch of Bumble BFF, Tinder Social, and various other companies that have added branches to their apps specifically for finding friends. And they work! Or at least they’ve worked for me.

Everybody is so attached to their phones, and that’s often perceived to be a negative thing, like we’re all out of touch with one another. But that’s truly not the case. Our phones are a gateway to connecting with new people, experiences, places, and opportunities. They’re a way of feeling less lonely and making more memories with people you wouldn’t have met had you not had that app on your phone in the first place. Really, your experience comes down to your perception and how you decide to use your device and the applications on it.

Make a Friend...Because You Can’t Settle Down With a Stranger

I’m grateful that I’ve broadened my range and reframed my mindset from thinking that the top dating apps are solely for dating and finding my next relationship, and started perceiving them as friend finders. Yes, my goal is to eventually settle down, but I can’t do that with a stranger. I need to get to know them on a deeper level first. I need to make them my friend. And you know what they say: The best, happiest, most trusting relationships usually start as friends first.

ByMorgan Mandriota
Last updated: Jun. 22, 2020
Morgan Mandriota is a freelance sex and wellness writer with bylines at Betches, Health.com, and BuzzFeed. Her insight has been quoted in Cosmopolitan, Tinder, The New York Times, and more. When Morgan isn't writing about orgasms, dating struggles, or CBD, she loves traveling, eating tacos, and training in Brazilian jiu-jitsu.
Best Dating SitesCompare All
Zoosk
EliteSingles
eharmony
Match
SilverSingles
Compare All