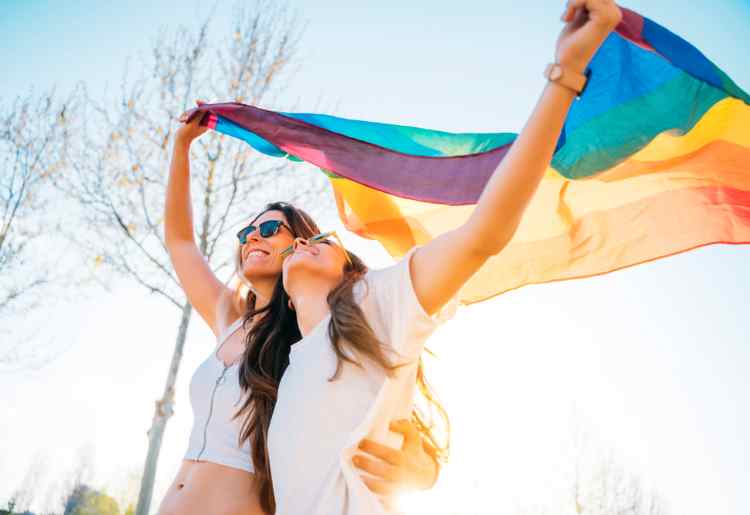 It’s June, and you know what that means: Pride is upon us! Everywhere across the globe people will be attending parades, parties, and protests in honor of this epic and monumental topic. It’s a time to raise awareness, join together with fellow LGBTQ+ friends and supporters, and collectively raise the bar on the world’s level of acceptance and sensitivity toward others in general.

It’s also a great place to find other LGBTQ+ people who have a lot of things in common with you. If you’ve been looking for someone to build a relationship with but have been striking out in the more traditional venues, you might be tempted to use Pride as a way to pick up potential partners. While we commend your efforts to create a more meaningful relationship with like-minded individuals, check out why Pride might not be the best place to go looking for love and what you can do instead to meet Mr. or Ms. or whomever Right.

This year big pride gatherings won't be taking place due to the ongoing fallout from the Coronavirus pandemic, so it's even more of an excuse to head online to find that special someone. Starting a relationship through a dating site or app is a great way to really get to know each other, especially during a time when the world will be celebrating pride and diversity together using virtual platforms.

A Little Bit About a Big Subject

In case you thought that it wasn’t important to turn up for a parade featuring a crowd of rainbow-touting fanatics, think again. Much of the tremendous progress that the LGBTQ+ community has enjoyed in recent years is due in great part to these parades, festivals, and events held during Pride. So, this isn't just another excuse to let loose, go wild, and have fun; there's actual purpose behind it.

Pride has become more than just a series of random celebrations. In fact, today, these events often discuss important and real-life topics like LGBTQ+ rights, staying safe in an obviously straight-heavy world, and coming up with new ways to make inlays for pride acceptance. Pride is celebrated all over the world and in most major cities and countries. Many Pride events are structured around removing the restrictions or discriminatory laws persecuting gays, lesbians, and the rest from within the legislation.

At the core of the event, Pride is about teaching acceptance, tolerance, and appreciation for one another's differences, whatever they may be. Members of the LGBTQ+ community have been discriminated against for many years, and even today, there are plenty of countries that do not recognize these relationships according to the law and have other legal ramifications. Some of the more astounding ones include:

As you can see, Pride isn’t about partying. In fact, it is an event or series of events dedicated to raising awareness about a really serious subject that affects millions of people around the world every day.

Getting Lucky During Pride

Now that you have a better understanding of what Pride is about (no, not just a fun excuse to paint your face and spray people with fizz), you can approach the event with a little more respect and appreciation.Usually Pride parties, parades, and festivals are really great places to bond with other LGBTQ+ers who think like you, have had many of the harrowing life experiences and discrimination trials that you have, and maybe even discover love that’s been sitting right next to you. But there are acually advantages to the fact that this year those big events won't be happening. And here’s why:

So, No Love During Love Fest?

Hold on a second. Are we saying you shouldn’t embrace love and relationships during the very events that are set up to celebrate and defend LGBTQ+ people’s rights to establish those relationships? Absolutely not! On the contrary. You should take your partner by the hand, prance around with one another being hopelessly in love throughout the whole of Pride. Just don’t go to the festival trying to find a soulmate.

Instead, try fostering a positive and meaningful relationship with someone before the event. This is a better option for a few reasons:

Ready to find love to flaunt during the festival? Here are a few great places to find a date for Pride events:

Zoosk is one of the biggest networks of LGBTQ+ singles in the world. There are actually over 1 million, and it was rated as one of the top lesbian dating sites in the country. So, if you’re looking for that wonderful woman to settle down with and create a long-lasting, meaningful relationship, Zoosk is a great place to look. Zoosk also has great search functionality and a cool mobile app that makes dating on the go a snap.

Match.com is known to any single, straight, gay, or otherwise. It’s got a massive network of singles, including plenty of LGBTQ+ people. So, there’s a ton of options to choose from. Plus, this service has one of the highest success rates around. The reason Match is so successful is because of its proprietary matchmaking software. It has a smart algorithm that uses behavioral learning to figure out what you really want in a relationship, and then sends you matches that fit those criteria. So, you really get women you want to date, not just annoying misses all the time.

Compatible Partners is also a great lesbian dating site because it takes members’ safety seriously. It has a built-in phone system, so you can speak to other members without giving them your phone number and thorough identification methods for filtering out the creeps, spammers, and phonies.

Whether you’re a lesbian looking for love in New York, Cincinnati, or Europe, there are plenty of fish in the sea. You just have to know where they’re biting. Check out some of the best online dating sites for lesbians and gay dating, and land yourself a hot date for the event.