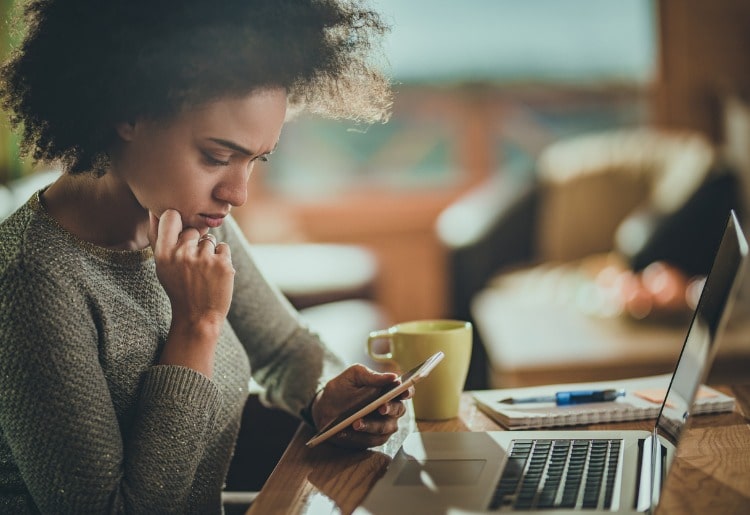 Millions of people use dating apps to try to find their next casual hookup or long-term partner, and I’m one of them. No matter what we’re looking for, though, it seems like we all share a few things in common.

We all tend to behave in similar ways when we’re setting up our online dating profiles, chatting with people, and preparing for dates… but for some reason, we don’t want to admit to doing these things. So, allow me to confess our online dating sins on behalf of us all.

The list goes on and on, but here are 10 of the most common things that we don’t want to admit we all do when dating online:

1. Caring Too Much About Looks

We’re shallow. It’s fine. I’ll be the first to admit that I am. Personality is *way* more important than appearance, and I totally believe that (if you need proof, just look at my exes). But let’s face it, dating apps are super shallow at the surface level. You’ll know right away at first glance whether or not you want to talk to someone based on their photos. I know that I’ve passed on people whose bios were super clever just because I wasn’t immediately attracted to them based on their pictures. Sorry, not sorry.

2. Stressing Over the First Message

Communicating over dating apps is difficult because no one knows how to start or hold a conversation, so it’s no surprise that we tend to stress over sending the very first message. Who’s going to send it? If it’s me, how long should I wait to send it after we match? And what should it say? Is what I drafted extra or just enough? If they sent it, what should I reply to keep the conversation going? Maybe it’s just my anxiety speaking, but those are a few of the questions that go through my head every time a match is born. I’m willing to bet I’m not alone.

Everyone tends to say the same crap on their profiles. They love puppies, eat tacos, and watch Breaking Bad. We get it. To be completely honest, I don’t care about any of this, because I like all of those things too. Show me what makes you unique. Include a funny joke or brag about something not everyone can brag about. Use your photos, bio, and messages to keep my attention rather than lose it with your mediocrity.

I don’t care what you say. We’re ALL guilty of “creeping” on our matches. There’s a fine line between how much “stalking” is too much, but it’s easy to fall into an abyss of researching the potential love of your life on the internet. You just want to know everything about them… for safety measures, obviously. I’d be lying if I said I never paid $5 for a background check to find out if someone I matched with is legit or not. It’s not my fault if I don’t want to be killed!

5. Using More Than One App at a Time

By more than one, I mean three. I’ve had Tinder, Bumble, and Hinge all downloaded onto my phone for months. It’s smart to do this, though, because different people use different apps. I’ve found people on Tinder that were nowhere to be found on Bumble, and vice versa. The more platforms you use, the higher your odds of finding someone. Duh. It’s the most effective strategy!

6. Ghost People You Lose Interest In

I hate being ghosted, but I’ve ghosted people that I lost interest in. Yes, after chatting with someone for days, or weeks, a quick message saying “I’m no longer interested in talking” or something along those lines would be nice. I don’t know what it should say because I’ve never sent one like that before. Don’t judge me. Sometimes it’s just easier to disappear. Are people really disposable nowadays? I’m not sure. I don’t think so, but why should we continue to waste our time talking to someone if we know it’s not going to go anywhere?

7. Forgetting to Check Our Notifications

On the other hand, sometimes we aren’t ghosts. Sometimes we’re genuinely forgetful and let our potential dates fade away by accident. We want to find a relationship, so why do we do this to ourselves? Sigh. I can’t tell you how many times I’ve missed out on talking to really sexy, funny people because our matches expired within 24 hours. Why? No reason other than I forgot to open the app. I even have my notifications turned on, so I immediately see as soon as the connection is made, but I just totally forget to go back in and message the person because I care too much about when to send the first message (see Point #1).

8. Swiping on the Toilet or Before Bed

I don’t personally swipe on the toilet, but I have tons of friends who do. My vice is swiping before bed until I can barely keep my eyes open. This is an issue for many reasons, but especially because:

But, hey, swiping is a great way to pass the time no matter where you do it and for however long, right? Right.

9. Send Outfit Photos to Our Friends Before Dates

Anytime I’ve ever gone on a date with a person from a dating app, I’ve always thought way too long and hard about what to wear, to the point that I’d literally send 3 selfies in different outfits to my best friend to see which one she likes best. Because if you don’t naturally overthink about what you look like when going on a first date, then do you actually even care about that person or want to give them an awesome first impression?

10. Deleting the Apps When We Get Frustrated

If I don’t use the dating apps for a long time, if I get frustrated when someone messages me something rude, or if I don’t find anyone “good” in a while, I’ll delete them off my phone. Not necessarily permanently, because I’ll probably reactivate them in a few days or weeks as soon as I get bored or lonely. But I’m definitely guilty of deleting and redownloading the apps far more often than I’d like to admit. As I talk to friends and dates about their dating app habits, it turns out this behavior is very common. The online dating struggle is real, folks.

Are you guilty of doing all of these things? If so, join the club! You’re not alone. We might be looking for a hookup or everlasting love, but that doesn’t mean we’re not going to be silly, reckless, awkward, or stupid about doing it in the meantime… well, at least I’m not.

Now you know that you’re not alone in your dating habits, it’s time to join a top dating site to find other like-minded singles who are just the same as you.

ByMorgan Mandriota
Last updated: Jun. 22, 2020
Morgan Mandriota is a freelance sex and wellness writer with bylines at Betches, Health.com, and BuzzFeed. Her insight has been quoted in Cosmopolitan, Tinder, The New York Times, and more. When Morgan isn't writing about orgasms, dating struggles, or CBD, she loves traveling, eating tacos, and training in Brazilian jiu-jitsu.
Best Dating SitesCompare All
Zoosk
EliteSingles
eharmony
Match
SilverSingles
Compare All