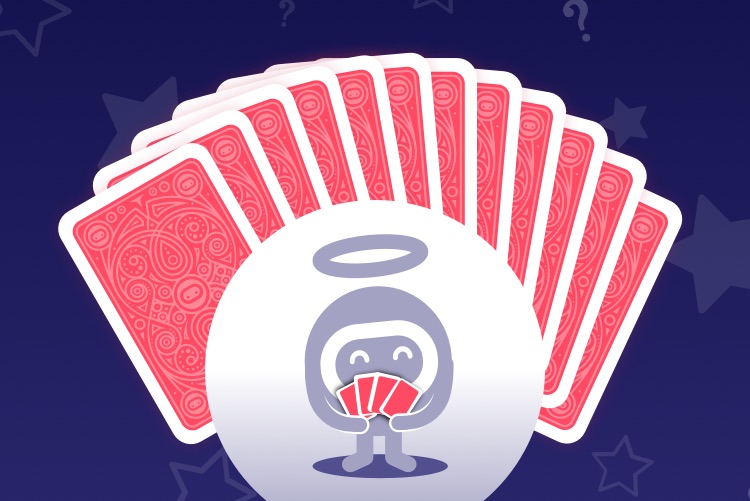 Tarot cards are seeing a resurgence in popular culture. The centuries-old psychic medium is being embraced by a new generation of seekers, artists, and even those who typically shy away from all things new-age.

It’s a trend worth noting, if for no other reason than the fact that tarot has historically been an underground activity, and one practiced by the spiritually-minded. So what accounts for tarot’s ascent into the mainstream, especially amongst a generation known more for pragmatism than spirituality? Why tarot above other psychic mediums? And why on the internet, of all places?

Tarot might be the most democratic of all psychic mediums. In clairvoyance and other types of readings, the answers are at the discretion of the psychic. In tarot, the cards are laid out for all to see, and for all to interpret.

The images on tarot cards are bold, evocative, and easy for anybody to understand, at least on a basic level. Sure, there are multiple layers of meaning, but depictions of the Fool dancing towards the edge of a cliff, or the Hanged Man dangling upside down, tap into the human experience in a way that even the non-initiated can pick up on and apply to their lives.

That could be one of tarot’s main appeals: the fact that the querent is privy to the same information as the reader. The psychic may be privileged with background knowledge, but the cards themselves are open and free for interpretation, no mediator required.

At least that’s the attitude amongst the new generation of tarot enthusiasts. Some purists would argue that true tarot requires deep study and preparation. But others think that intuition and intent are enough to crack open the tarot’s inner vocabulary.

One of those is Kim Krans, an indie tarot-deck creator whose self-published deck, “The Wild Unknown” has landed on the New York Times bestselling list. “It doesn’t even matter if people know what the cards mean or not, or if they have this deep relationship with the tarot,” she told Huck magazine. “It’s hitting them in the way that they’re ready to be hit.”

No doubt this is appealing in an age when power is abused, information seems suspect, and transparency is all but extinct. Call it open-source mysticism: an encounter with the tarot’s illustrations, which at once veiled and universal, both mysterious and instantly relatable, is proving a liberating experience for those who feel powerless.

“It’s no surprise that a lot of the online [tarot] communities are driven by queer people or people from minorities, segments of society where people feel as though they’re not seen or heard,” Fiona Lensvelt, the co-founder of Litwitchure, a popular London-based “tarot cabaret,” told “The Guardian.” “Because tarot allows you to consider a problem, give a voice to it, work it through.”

It may seem ironic that a practice commonly associated with fate could be a tool for liberation. But that’s exactly what’s happening. Today, people are starting to approach tarot less as an oracle that predicts the future and more as a meditative storytelling tool that can clarify their obstacles and give them a sense of control over the present.

Leaving the Future Behind

Whether or not tarot was ever used to “predict the future” is an argument for historians. But that’s been it’s reputation at least. Today’s tarot enthusiasts, however, are more than happy to cast off the chains of fortune telling for a gentler, more introspective practice.

Take Lensvelt’s Litwitchure, which bills itself as a secular tarot service that focuses on the literary aspects of tarot cards. To her and many like her, tarot cards are more of an organizing principle than an oracle; they simply articulate, through established archetypes and some self-reflection, the range of emotions, patterns, and obstacles common to us all but unique within each of us.

Some purists may not agree with this demystification of tarot. But it’s brought many into the fold who might otherwise scoff at anything resembling the occult. For many, the tarot is starting to feel right at home beside yoga, meditation, and other mindfulness tools.

Of course there’s no ignoring tarot’s visual appeal. The illustrations, especially those of the iconic Rider-Waite deck, seem to be chiseled out of time itself, peering like little windows into the theater of the unconscious—ethereal, inviting, and yes, a little sinister.

Or to put it another way, they pop off the screen. Which could explain why tarot has become such a popular motif on Instagram accounts, crowd-funded DIY decks, and even high-fashion runways.

That’s one reason why tarot may have found such a welcoming home on the internet. But the booming industry of online tarot readers, apps, and practitioner communities proves that the enchantment goes deeper than ink.

For one thing, people can dabble at their own pace. Maybe an artsy tarot card design catches your eye on Instagram and you start following a tarot blogger. Slowly, you start absorbing tidbits about the cards as they appear in your feed. Next thing you know, you’ve begun to identify with the cards, and this without a single visit to a fortune teller or new age bookstore.

Kim Krans is an example of the internet’s ability to launch tarot into the mainstream. “The Wild Unknown” was a self-published project until social media skyrocketed it onto the bestseller list. “My decks wouldn’t have spread in the way they have had it not been for Instagram,” she told “Huck.”

Online tarot reading platforms, such as Keen and Psychic Source, have flourished as well. The curious as well as the initiated can have their cards read over Skype with the click of a button. There are a plethora of sites these days that offer online tarot card readings, further lessening the gap between the mystical and the mainstream. Though some still operate on the promise of old-school fortune-telling, many practitioners are offering readings that take a more meditative, introspective approach.

The Culture of Tarot

Of course tarot isn’t the only psychic medium thriving online. You can find mediums, clairvoyants, dream analysts, and rune and crystal ball readers across the web, often times sharing a single platform where webcams and live chats let customers reach them instantly.

It’s tempting to say that tarot’s resurgence is an extension of the larger popularity of online psychic readers. But there’s a cultural zeitgeist around the tarot that doesn’t seem as strong with, say, palm reading or crystal balls.

Tarot’s distinct imagery definitely plays a part. But it’s the combination of visual symbolism and literary interpretation that makes it a perfect topic for internet obsession. The same analytic fervor that led Lost viewers to swarm discussion boards seems to be in play with tarot. With room for discourse, multiple interpretations, endless theorizing, and esoteric cross-referencing, it’s not surprising that tarot has transcended mere practice and become the centerpiece of a culture.

It’s impossible to say whether tarot’s online resurgence is just a passing trend or an indicator of a new life for the age-old practice. But in these fractured and chaotic times, it’s proving one of the more powerful tools for autonomy and direct experience. And with the internet’s ability to make tarot more accessible to people, and more adaptable to their needs, there’s an argument to be made for tarot becoming a permanent, albeit slightly re-tooled, outlet for reflection and expression. If the internet continues to help tarot undo the shackles that once made people speak of it in hushed tones, it may continue to speak louder, and more and more people might start to listen.