The Quirky, Delicious History of Pizza Across America 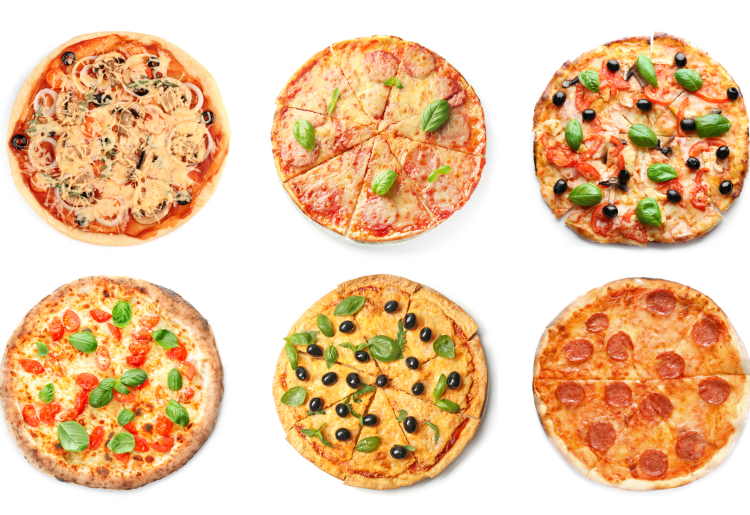 Tomatoes, dough, cheese--these simple ingredients have existed since ancient times. But it wasn’t until the late 1700s in Naples, Italy, that they coalesced into something whole and blissfully perfect--pizza, the dish that everyone will happily gather around.

The history of pizza is often disputed, and its precise origins can be as spotty as the cheese-speckled cardboard box left in its wake. But while flatbreads have been a staple since ancient Rome, most historians agree that pizza as we know it first took form in 18th-century Naples, where it was hawked from portside kiosks as a cheap, simple snack for the city’s working poor.

That original pizza may not be what many American’s recognize as the meaty, piping-hot pies that show up at their door in 30 minutes or less. Once it landed on American shores, pizza was quickly adapted to meet regional tastes and quirky local customs, evolving as it made its way west from New York to California.

Nowadays, the US boasts many unique styles of pizza. From the iconic NY-style slices that some claim get their magic from New York’s unique tap water, to the famous Detroit-style pies that were first baked in repurposed auto parts, America’s pizzas have histories as entertaining as their flavors are delicious.

The Best Meal Delivery Services for 2020

What is the Top Prepared Meal Delivery Service?

So in celebration of the world’s favorite dish, here’s a look at 5 pizza styles from across the US.

True, Neapolitan isn’t an American creation. But it only makes sense to begin in Naples with the pizza that spawned it all.

After all, how many recipes do you know of that are protected by UNESCO? So revered is this bubbly, doughy, Naples original, that the world-heritage agency placed it on its list of Intangible Cultural Heritages. And for good reason.

Neapolitan pizza is held to such rigorous standards that it can be seen as an exact science. In fact, there’s an official regulatory body--the Associazione Verace Pizza Napoletana--that sets rigid rules for its preparation and creation. According to the AVPN, an authentic Neapolitan pizza can only be made with tomatoes grown on the side of Mount Vesuvius, and must contain Buffalo mozzarella cheese that originates from the milk of water buffalo in Campania, Italy.

The result? A thin, floppy, pliable pie famous for its softness and simplicity. The cheese should slightly bubble over an airy crust that has the perfect balance of softness and char. The ingredients are deceptively simple: dough, tomatoes, mozzarella, basil, and olive oil. So don’t even think about pepperoni--no other ingredients are allowed.

Best way to eat it: at an AVPN-certified pizzeria. You can find American locations here

Goes best with: a nice pale ale that perfectly offsets the acidity of the tomatoes

The famous New York-style pizza started out, at least, as a pretty close approximation to the Neapolitan. But soon after it was brought to America’s shores by Italian immigrants, the Neapolitan slowly transformed to meet the unique needs of New Yorkers.

For one thing, many Americans couldn’t afford to buy a whole pie. So pizza makers started to chop it up and sell the pieces at lower prices--and thus the slice was born. Today, of course, the iconic sight of greasy, floppy, New York pies, cut into triangles and displayed beneath heat lamps, is a common one. But at one time it was a novel, and perhaps even controversial practice. Today, of course, New York-style slices are beloved not just on the east coast, but across America and the world.

Best way to eat it: folded, on a paper plate, while walking down a Manhattan sidewalk

Goes best with: a can of soda

If purists of the Neapolitan school scoffed at what New York had done to their precious pies, they may well have keeled over upon seeing Chicago’s rendering of Naples’ famous export.

Like everything of universal importance, the deep dish pizza is the source of plenty of argument. Some say it was invented by Chicago’s Pizzeria Uno in the 1940’s. Others claim it was first created by the founder of Lou Malnatis. Either way, both restaurants are still dishing out their versions of deep dish while loyalists are still bickering about the true origins, at least when their mouths aren’t stuffed with gobs of dough, cheese, and sausage.

So, what’s the difference between Chicago and traditional pizza? About 3 inches, for starters. Of all pizzas out there, deep dish is the one that most literally embodies the term “pie.” It’s a thick, tall, gut-busting behemoth of crust and mozzarella, with fresh tomatoes spread above the cheese and chunks of Italian sausage dispersed throughout.

Best way to eat it: after fasting for 3 days

Goes best with: a fork, knife, and load-bearing table

It’s only fitting that Detroit’s famous square pizza owes its origins to another iconic product of the Motor City--the automobile.

Detroit pizza is known for its square shape and thick, focaccia-style crust. That square shape and deep crust, it turns out, comes from the pans that the pizzas were originally baked in--blue steel pans that creator August “Gus” Guerra repurposed from automobile parts.

These pans, combined with a Sicilian pizza recipe borrowed from the mother of Guerra’s wife, became the wellspring from which Detroit pizza took form. Detroit-style pizza is thicker than Neapolitan and NY-style pizza, and made from a spongy Sicilian-style dough with a crisp, caramelized rim that gives way to a softer core. The pizza, topped with cheese and often pepperoni, originally boasted another feature borrowed from Detroit’s main export--”racing stripes,” or two stripes of tangy, homemade marinara sauce.

Best way to eat it: with Motown playing on the jukebox

Goes best with: a pitcher of beer

Fun fact: Detroit-style pizza was invented in the 40s by the owner of Buddy’s, a “blind pig” tavern that served booze under the radar of the authorities--and still exists today

California-style pizza isn’t quite as distinct as the other pies on this list. It’s served on a traditional wood-fired crust and topped with cheese, sauce, and veggies. The main distinguishing factor, however, is its size--California pizzas are traditionally served in personal portions, small enough to allow each person their own preferred ingredients.

Which makes sense, since another defining factor of Cali-style pizza comes from one of its purported inventors--Alice Waters, famous chef, activist,and pioneer of the modern organic food movement. Rather than hewing to the traditional toppings of cheese, sauce, and meat, Waters began topping her pizzas with untraditional, organically produced vegetables like artichoke hearts, goat cheese, and truffles.

Best way to eat it: with a view of the Bay in sight

Goes best with: a glass of organic sparkling juice

American Pie: A Far Cry from the Naples Original

Pizza is the one thing everyone can agree on. Well, at least in theory. Though there’s hardly a soul out there who doesn’t enjoy a piping hot pizza, the once-simple Italian flatbread has earned plenty of twists, quirks, and flavors along the way, along with loyalists who will argue until their stomachs hurt about the merits of their preferred pie. Whether you prefer a greasy, folded pocket of cheese while battling the throngs in New York, a gut-busting wedge of Chicago deep-dish, or an artichoke-topped pizza from the Bay area, you’ll find plenty of pizzas across America to please your appetite.