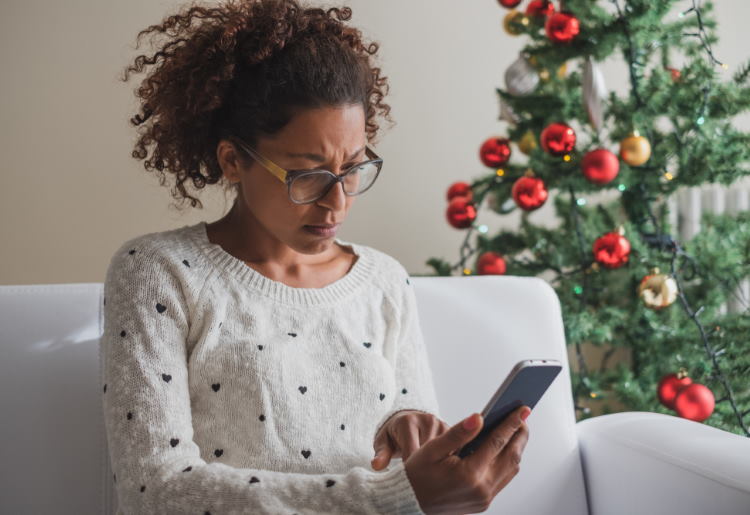 Remember that Seinfeld episode where George broke up with his girlfriend to avoid buying her a Christmas gift? Of course not, it never happened. But it seems straight out of the sitcom’s playbook, doesn’t it?

Unfortunately, this is a real-life storyline. So much so that it’s officially been given a name: “Scrooging,” which, in modern dating parlance, is the act of breaking up with your partner instead of shelling out for a Christmas gift. Consider it the latest candidate for our ever-growing lexicon of awful dating behavior.

Named after that infamous Dickensian cheapskate, Scrooging was first observed and subsequently named by eharmony, who noted a rise in budget-inspired breakups just prior to the holidays.

Naturally, Scrooging landed right in that internet sweet-spot between disgust and glee, and it was soon flaunted by bloggers as the latest, shiniest example of how horrible we can be. Articles were written. Victims were interviewed. Dating experts gave their opinions, pop psychologists weighed in, and journalists scrambled to their MacBooks to issue dire warnings to singles or those soon to be.

Is Scrooging a Real Thing?

Maybe I’m wrong. Maybe there are significant amounts of people opting out of relationships for no other reason than to save some money or a trip to the mall.

But it seems like a stretch. And by definition, Scrooging can only be observed once a year. Having only been introduced in 2018, it’s only had one holiday season to prove itself worthy of its progenitor, “Ghosting” or even its quirky cousins “Cloaking” and “Orbiting.”

With the holidays approaching, maybe it’s worth checking in to see if Scrooging was just a weird outlier—perhaps the product of an uncertain year—or if the currently penciled-in term does deserve a coat of ink and a permanent spot in this, our compendium of modern romantic cowardice.

What Do the Experts Say?

To be fair, it’s worth hearing what the experts had to say. Unfortunately, it wasn’t much. Plenty of dating specialists pointed to the obvious—that the holidays are a time of both economic and emotional stress. Whether or not this is supposed to distinguish the highly particular act of “Scrooging” from regular holiday-time breakups is a mystery.

Some, meanwhile, trotted out a 10-year old study of Facebook statuses that revealed December 11th to be the most popular day of the year for breakup announcements. Interesting, sure. But a 10-year-old study on Facebook behavior seems hardly relevant to the 2019 dating scene.

Luckily the BBC took a more grounded approach. After some necessary snark, a weigh-in from dating experts, and even some stats from a Bank of England report, the writer turned to relationship expert and divorce lawyer Sheela Mackintosh-Stewart. “Christmas ‘Scrooging’ has become a convenient excuse to dump a partner when they don’t want to deal with the underlying issues and conflicts that are the real issues,” she told the paper.

This writer agrees. I’m sure Scrooging has happened. But pinning a breakup on a gift without considering the deeper motivations seems like a whole lot of jargonizing for the sake of, well, itself.

But who knows? Maybe our increased selectivity—no doubt influenced by online dating sites and the illusion of endless partners—combined with millennial debt or simple frugality—has somehow convinced us that the worth of a partner is contingent on our willingness to go to the mall for them. Maybe we are that strapped for cash. Maybe we are that terrible.

It seems more likely, though, that Scrooging is a side effect of a season that demands we make decisions and plans; a byproduct of personal inventorying set under the harsh light of Christmas trees and tinsel.

Maybe It’s for the Best You Got Scrooged?

And maybe that’s a good thing.

Sure, the timing is terrible. There’s nothing worse than having to lug your suitcase and heartbreak through crowded airports and then spend a week trying to hide your emotional baggage from your family.

But let’s be honest: those who would break it off right before Christmas—whether from a fresh realization or ridiculous penny-pinching—aren’t worth the scraps of gift wrap on your floor.

And maybe without holidays that force us to take stock of things, we’d just let our relationships drift along until something or someone better came along. Maybe Scrooging isn’t a matter of being cheap and hoarding your chips at all, but of actually forcing you to play your hand.

Of course, we’ll have to wait until after the 2019 holidays to see whether this Scrooging thing has weight or not. If it does, it’ll be worth asking some questions. Are we really this cheap? Are we really that terrible? Is debt, or laziness, or indecision, turning our hearts to stone?

But whether Scrooging is actually rooted in thriftiness, or is a byproduct of seasonal influence, or even just a manifestation of Costanza-esque pettiness, there’s no denying we should find a better time of year to end our relationships.

ByScott Hirsch
Last updated: Feb. 24, 2020
Scott is a content writer who has worked as a special education teacher, lifestyle writer, and researcher. He enjoys literature and travel and believes that a sense of wonder and curiosity is the key to living a fulfilled life.
Best Dating SitesCompare All
Zoosk
EliteSingles
Match
SilverSingles
OurTime
Compare All